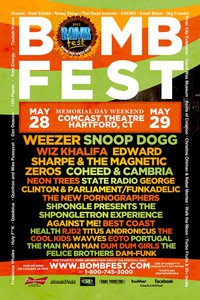 We couldn't ask for better news regarding B.O.M.B. Fest. In fact, it would seem wrong to ask for anything more because the lineup is so amazing, and because they're bringing all these incredible bands to Connecticut for a great cause. But, of course, the festival had to get better: It's moving from Danbury to Hartford.

This is great in so many ways.

First of all, I've driven to and from Western Connecticut State University a number of times, and I was ready to do it again for B.O.M.B. Fest. Yes, it's a college campus, so there's space, but it's kind of far off the highway, and some of those roads can get difficult to navigate when there's any traffic at all. It's also on the western side of the state, which is far for a lot of Connecticut residents. The Comcast Theater in Hartford, which I will forever call the Meadows, is right off the highway, and it's pretty centrally located. This is a two-day festival so a lot of us will be driving in and out two days in a row. Making the commute easier means we can have a more enjoyable time overall.

Second, the Meadows knows how to handle a concert crowd - people go there for big concerts. The traffic situation may be tough, but it will be fine. I've been to a lot of concerts there and have never been late or had problems because of traffic or parking. It will be better than driving to a place where they've never had to handle that big a crowd. In fact, the festival was moved because of capacity issues, which I'm not surprised about. More on that later in this post.

There are so many benefits to having a festival of this magnitude at a place that can handle it. We'll have parking. We'll be directed to parking as soon as we get off the highway. If this were still at WCSU, we'd drive a long way before we'd know where to park, and there may not be places to park directly next to the concert. At the Meadows, there are huge parking lots just for concert-goers. There are porto-potties right in the parking lot and on the outskirts of the venue, and once you get inside, there are plenty of bathrooms (something you have to worry about more when you're a girl, and especially when spending all day at a concert festival, only wanting to take short bathroom breaks so you don't miss your favorite bands).

The Meadows also has its own concessions stands, so we won't have to worry about food or drink throughout the day, when we'll be spending the majority of two whole days there. That was one of the great things about B.O.M.B. Fest last year at the Durham Fairgrounds - there were stands set up for food service already, so we stayed full and hydrated throughout the day.

There have been a lot of complaints on the event page - both today because of the location change, and over the past few weeks because certain local bands weren't chosen to play. Those complaints are completely outrageous and are the opposite of what this festival, and what appreciating music, is all about. Hartford is more convenient for a lot of other people, people who were willing to drive as far out to Danbury to see these bands. Even if it isn't as convenient for residents on the western side of the state, Connecticut is still a small state - the commute isn't that much longer. There won't be issues of intimacy with the bands - it will be exactly the same. Either way, you have to set up stages and speakers and move around from stage to stage to see the different bands. When you're really into a concert, you're there for the music, for the fun of it, for yourself, and for the band. It will be great. And all the side benefits of this festival being held at a concert venue that can cater to this large a crowd will only make it better.

On the local band argument, over 500 bands tried out for 25 spots. The people picking those bands care about local music and had a tough decision to make. They're people who work everyday to support local music in our state. They deserve appreciation for what they do, or respect at the very least.

I noticed that Frank Bombaci himself commented on some of the posts complaining about the venue change, trying to explain his decision. In one response, he said that "this was one of the hardest two weeks of [his] life!" He said the university had last-minute capacity concerns, and he was faced with the decision to either cancel the show or move it. He's working closely with the Comcast management to keep the B.O.M.B. Fest feel, and this is the first time the Comcast has held a nonprofit event. There will be information on the B.O.M.B. Fest website: http://www.bombfest.com/ on Tuesday regarding refunds and answering FAQ.

If anything, the Bombacis deserve our thanks for all the hard work they've done putting together the festival this year, and the past ones. B.O.M.B. Fest has grown drastically over this short amount of time - it went from being an awesome festival to the premiere one in the area. It's bringing us some awesome bands, and it's sure to be an amazing time. That's something we should appreciate, not complain about.

In case you didn't see our initial post on our excitement for B.O.M.B. Fest, you can see it here: http://merrypicnic.blogspot.com/2011/03/tune-in-turn-on-bomb-out.html

And if you've been keeping track, we've been doing quick features on some of the bands we'll see, and we'll keep doing them until the festival. Keep checking back!

Welcome to our blog!

We'll have regular posts about music, events and fun things to do in the Connecticut area. If you have any suggestions, please e-mail us at merrypicnic@gmail.com.

Thanks for stopping by!

"It's like I'm hanging out with you guys and you're talking about concerts and festivals like you do. It's virtual hanging out." - Our friend Nick